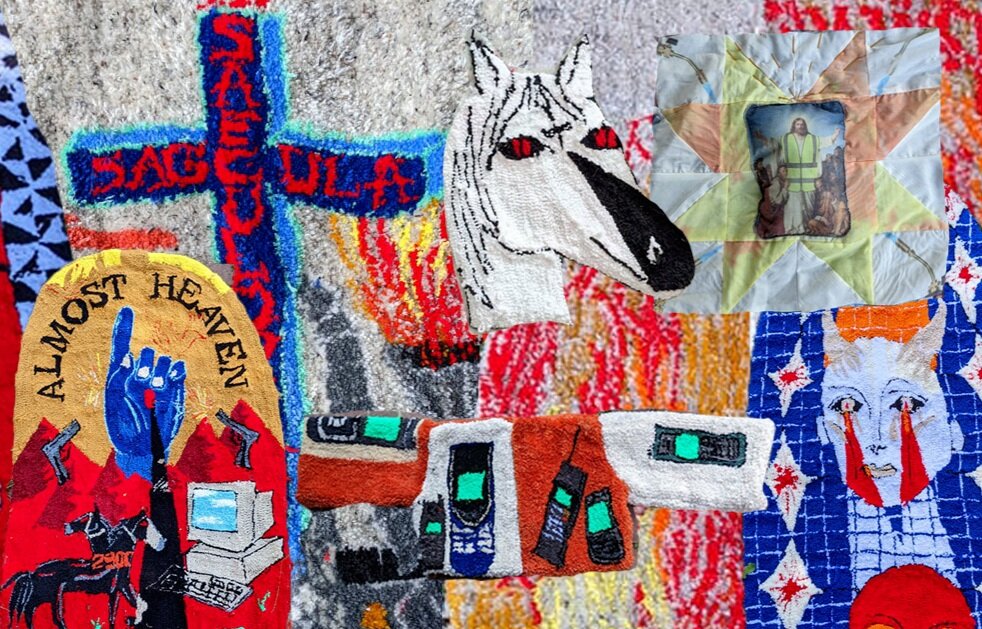 After seeing James Cameron's science-fiction film The Terminator (1984) several times, Molly Z.G. (they/them) dreamt that when a person dies, their body is sent to a steel mill, melted down, and forged anew to resemble the chrome cyborg assassin of the movie––an irregular and unnerving rebirth. Growing up in a Catholic family in Pittsburgh, Z.G. was familiar with Christian iconography, and imagined parallels between the steel mills where their parents worked and the factories of Cameron's dystopian world. The conversations between these two experiences––the religious and the post-apocalyptic––form a dark and fantastical narrative, one that Z.G. navigates with deft, clever artistry and a sense of cheerful nihilism. Notions of fantasy, labor, and resurrection are synthesized to build immersive and witty installations, recapturing dreams and summoning reverence.

Mounted on the wall to resemble the stained glass windows of a cathedral, Z.G.’s rugs are made of yarn, monks cloth and velvet, incorporating latin phrases alongside pop-culture imagery and designs to a humorous effect. An oval rug titled god’s hand (2021) demonstrates this anachronistic approach, depicting a gesturing blue hand framed by two pistols, positioned above a 90s-era PC and a two-headed horse dated 2900. This fusion of Christian imagery and pop culture yields a visual language entirely unique to Z.G., one in which the absurdity of life after death within the context of Catholicism becomes a stance worthy of ridicule, or at the very least, the set up for a punchline.

In the construction of this sacred space, religious iconography and the influence of Cameron's realm remain foundational, but their contemporary take on craft deviates from tradition, cheekily implying that holiness does not come from God, but Appalachia. “I feel connected to these struggles because I am Appalachian, and my whole family is. And that has been my world,” says Z.G. They currently live in Southwest Virginia, having left the church and their hometown in the process. Z.G.'s current relationship to the divine is processed through brightly colored and wonderfully irreverent textiles, repurposing biblical stories and teachings in service of the working class struggles and politics in which she currently engages.Their version of the technicolor dreamcoat, stitched across the back of a garment reminiscent of that worn by a clergyman, reads “May the L ord take a liken to you.” Sourced from an image of the Pittston Coal Mine Strike of 1989, the phrase turns religion against the oppressor in a campaign to address class conflict. In Z.G.’s world, Jesus wears a construction vest.

Outside of the studio, Z.G. is the co-founder and member of nonprofit initiative Future Economy Collective, a role that furthers their reach into the possibilities of community void of religious and state-run authority figures. Beginning in 2020, the group opened SOUTHPAW, a flexible-use community space and volunteer-run cafe, which supports grassroots organizing efforts and mutual aid projects in the New River Valley. Currently raising funds to operate a new location, the FEC carries on the traditions so deeply ingrained in Appalachia of skill-sharing, harm reduction, and collective education. Z.G’s distinctive world-building––both in the gallery and in daily life––revolves around the golden rule so central to and yet tragically ignored by the region: that by caring for our neighbors and the land ourselves, we stand the best chance of survival and ultimately, salvation.